On August 4, 2020, the bill sent by the Executive Power to the National Congress on the “Restoration of the Sustainability of Public Debt implemented in Securities Issued under Argentine Law” was passed (the “Law”).

The adoption of the Law is performed under the framework of the agreement with the majority of the bondholders announced on August 4 of this year.

The Law contains the following provisions:

The Law provides for the restructuring of the national government debt implemented in public securities which were denominated in US dollars issued under the Argentine law called “Eligible Securities” through an exchange operation.

The Law also establishes that the restructuring will be implemented through a swap operation, based on the Law of Social Solidarity and Productive Reactivation in the Framework of Public Emergency No. 27,541, which contains general provisions aimed at granting powers to the Executive Power to carry out the process of restructuring public debt.

Eligible securities for the exchange are sovereign bonds denominated in US dollars or linked to US dollars issued under Argentine law, which include the LETES USD, LELINKs, a BONTE, the DUAL bond, the BONAR 2020, 2023, 2024, 2025, 2027 and 2037 and the PAR and DISCOUNT bonds.

Annex I of the Law, attached at the end of this article, includes a list of the bonds subject to restructuring.

The Law provides for the issuance of bonds denominated in US dollars and in Argentine pesos named as “New Titles” for up to fixed maximum amounts and according to certain financial conditions.

There are 4 US dollar bonds and an additional one for the payment of running interest. The Law also provides for the issuance of two bonds in Argentine pesos subject to adjustment by CER plus interests, which may be chosen by the holders of eligible bonds according to the eligible bonds they own.

1. LETES and BONARs with shorter maturities can opt for the Step-Up USD 2030 L.A.

Holders of LETES and some BONARs can also choose bonds in pesos BONCER 2026 2% or 2028 2.25% (securities denominated in pesos adjustable by CER plus interest).

The new US dollar bonds have the same financial structure as those offered in the exchange offer under foreign law (same amortization, incremental interest rate or “step-up” and maturity), except for the 2046 bond, which is not applicable for the local exchange.

The main difference is that the new US dollar bonds destined for local exchange are subject to Argentine law and, therefore, will not be issued under an issuance agreement.

As for the current interest, its treatment is equal to that of the offer for the debt under foreign law that is currently in force: they will be paid by delivering new bonds in dollars with maturity in 2030 at 1% -not in cash-, while the exchange offer under foreign law – to be improved in the next days – will establish that these new bonds begin to redeem in January 2025.

Those who choose BONCER 2026 or 2028 will receive additional titles for this concept according to the relationships established in the Law.

Incorporation of the RUFO clause

For new sovereign bonds under local law, the “Rights Upon Future Offers” or RUFO clause is incorporated.

This clause provides that if within the term comprised from the entry into force of the Law and five years from the date of liquidation of the new bonds under foreign law, Argentina voluntarily launches a better offer to the eligible securities governed by Argentine law or to the eligible securities governed under foreign law, the improvement will be extended to holders of new titles under Argentine law.

Those who have opted for BONCER 2026 or 2028 may participate in a new exchange for new bonds incorporating the best financial conditions of the offer.

It is worth clarifying that this right does not apply if the improvement is made in compliance with a court order or not appealable final arbitration award.

Non-adherence to the redeem invitation

According to the initiative, holders of Eligible Securities who do not adhere to the invitation to exchange will continue with their deferred payments until December 31 of the following year, under the plan that is currently in force.

The Law appoints the Ministry of Economy of the Argentine Republic as the law enforcement authority with the pertinent power to carry out all the acts tending to the enforcement of the Law as well as the authority to issue complementary regulations.

The Law itself provides for its character of public order.

The Law will entry into force on the day of its publication in the Official Gazette. 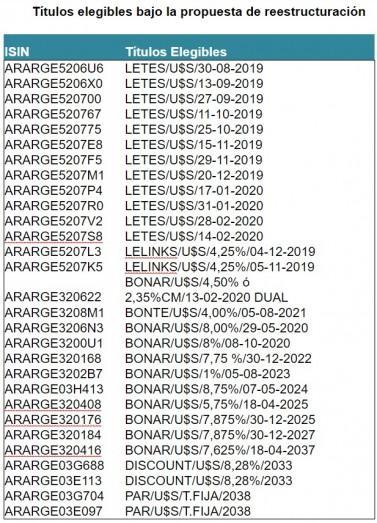 We invite you to join our monthly newsletter